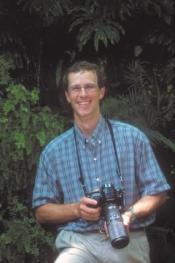 In his native Switzerland, Rolf spent his early adult years making furniture, teaching others the joys of birding and, as a hobbyist, shooting pictures. It wasn’t long however before his hobby, coupled with his love of the outdoors, became an obsession-and then, his profession.

After marriage and a move to Texas, Rolf made the commitment to devote his energies full-time to wildlife photography. The decision proved to be a good one. Today, Rolf’s award-winning work has been published in the United States, Europe and Asia. As a testament to his formidable skills, the self-taught naturalist won grand prize twice in the 2002 and 2004 Rio Grande Valley Land Fund’s Wildlife Photography Contests. Rolf followed those victories with another first in the 2005 Coastal Bend Wildlife Photo Contest. Both of these events were held in his adopted state of Texas.

Rolf’s personal mission is to help others experience nature through photography. He believes wildlife photography’s main issue is “to show people things in their environment they usually wouldn’t see.” His cleverly executed shots of all things great and small, in their natural habitats, and totally unaware of his presence, bring this mostly unknown world of the wild to an appreciative audience around the world.

On the ICF philosophy:
“A triple win. Photographers have private preserves to explore and shoot. Landowners who share the wonders of their property create new income streams. And, best of all, the environment wins with preservation and protection.”