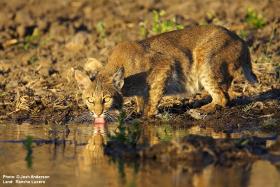 Photographer, author and inspirational speaker Connie Bransilver is a professional photographer living in Los Ranchos, NM. She has photographed nature on all seven continents, with emphasis on Madagascar and Indonesia as well as the Everglades. She is on the Board and Senior Founding Fellow in the International League of Conservation Photographers (ILCP) and former President […]

Larry Wheeler’s interest in photography began at an early age when he was hired as night photographer for a small town Oklahoma newspaper. Larry was fortunate enough to be tutored by the paper’s chief photographer who was not only an excellent photographer, but also an outstanding and enthusiastic teacher. Larry’s passion for creating strong, meaningful […]

John Martin, Chairman of the Board

John Martin recently retired after 25 years as a Certified Financial Planner for A.G. Edwards & Sons. In 1987, he became a founding member and the first president of The Valley Land Fund (VLF), a non-profit land trust located in the Rio Grande Valley of South Texas. John’s dedication to the conservation of wildlife and […]