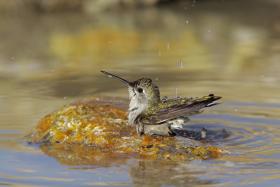 The images on this website are from the April, 2006 Pro-Tour of Nature Photography: Texas Hill Country. The beautiful photographs represent the work of 17 of the world’s finest nature photographers, taken over the course of 30 intense, sweaty and difficult 18-hour days. The teams, 17 photographers and 17 landowners, were randomly paired to document the wildlife and landscapes of the Texas Hill Country and to compete in the world’s richest photographic tournament. The inaugural ICF Pro-Tour of Nature Photography awarded $160,000 in cash, shared equally by the photographer and landowner of each winning team. The first grand prize of $64,000 was unprecedented.

The Mission of Images for Conservation Fund (ICF) is conservation of wildlife habitat using the power of nature photography while integrating art, eduation, economic dvelopment and natural history. Conservation is accomplished through the creation of wealth and the Pro-Tour is the primary tool for developing the Private Lands Nature Photo Tourism Industry.

The vision for ICF evolved as a natural extension of my dream of saving wild lands through the creation of economic incentives for habitat protection. Ten years of experince with the Valley Land Fund (VLF) Amateur Wildlife Photo Contests in South Texas plus 30 years in wildlife conservation and business convinced me that if we were to truly save ecosystems it would have to come through economics.

The success of the VLF amateur photo contests showed that settings installed for the competitions – photo blinds, feeders and ponds – attracted photographers long after the contest, and they were willing to pay signifiant day fees. Landowners had a new income source potentially greater than anything else they had ever attempted.

In 2003, Sam Mason became ICF’s Exeutive Director and only paid staff person. While Sam wrote the by-laws, filed IRS forms and developed ICF’s infrastructure, I recruited board members, partners, sponsors and participants for the inaugural 2006 Pro-Tour. My most important recruit was Bob Petersen, who dedicated two years of his life to the operations of the inaugural tournament.

The Texas Hill Country was selected because of its natural beauty and biodiversity. The region is susceptible to drought, fires and floods, making ranching income unreliable. The ever-increasing pressure to subdivide and develop is disrupting and in some cases destroying the complex ecosystems, placing ranchers in a position of fighting nature rather than fully utilizing nature as a source of income.

We were honored to dedicate the beautiful inaugural book, Images for Conservation: Book One – Texas Hill Country Edition, to Lady Bird Johnson, the lovely first lady who (in the words of journalist Liz Carpenter) “inspired a nation and beyond to protect the beauty of its native lands…These award-winning photographs are tiestimony to Lady Bird Johnson’s appreciative eye and elegant words about the natural spots of our planet.”

The purpose of the IF Pro-Tour is to educate landowners and photographers about the value of private lands photography, to stimulate the demand for private lands as a destination for nature photographers and to encourage the preservation of natural habitat. For the first time in history, ranchers will be able to create income from nature’s diversity.