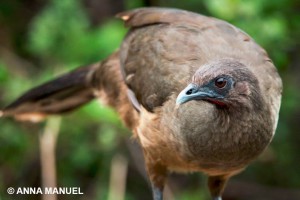 Congratulations to Anna Manuel who captured this close-up portrait of a curious Plain Chachalaca at Camp Lula Sams. Anna’s tight composition and tack-sharp focus on the Chachalaca’s eye are key elements in the success of this image. Anna will receive the 2015 Save Camp Lula Sams Coffee-table Book for being our Weekly Winner.

Would YOU like to be a Weekly Winner? Then sign up for a Full Day or Half Day of photography at Camp Lula Sams! You can reserve your day at: http://imagesforconservation.org/…/2016-save-camp-lula…/